If you are seeking an easy treatment to relieve your deviated septum instantly, without surgery, our soft nasal dilator can help.

“My wife and I have never slept better. I have been a sufferer of a deviated septum and allergies for years now. Consequently, I snore heavily which prevents me, and my wife, from getting a restful night’s sleep. Your Nose Cones have given me instant relief and allowed me to breathe freely without any discomfort. I am sleeping more soundly and therefore I have regained a tremendous amount of energy during the day.”

Relieving a deviated septum comfortably can be difficult.

The reason that it’s difficult to relieve a deviated septum is that the obstruction is anatomical, meaning that the deviation is part of the physical structure of the nose. Therefore, in order to relieve the septal deviation, the structural part of the nasal airways have to be gently held open to clear a breathing pathway around the area where the septum is deviated.

“Very pleased with these little devices. Peaceful nights are a bonus!!!!”

An easy option in nasal airway relief for breathing difficulties due to a deviated septum are Max-Air Nose Cones.

Max-Air Nose Cones are squeezie-soft internal nasal dilators that gently open the nasal airway. Breathing restrictions of your deviated septum are relieved instantly, without surgery or discomfort. Inhale fully, deeply and effortlessly for easier breathing and deeper sleep. (If your deviation is very severe, we suggest consulting with an Ear, Nose & Throat specialist.)

What does a deviated septum look like? Here’s a look inside the nose.

Here is an anatomically correct illustration of a deviated septum (shown in yellow).

When the nasal septum is curved into one of the airways, the Max-Air Nose Cones, through gentle pressure, hold open the narrowed airway around the deviation to help restore full, deep nasal breathing (without surgical intervention), so that you may breathe well and sleep well.

“You have a wonderful product that, even after two septoplasty surgeries, has drastically reduced my sleep apnea.” 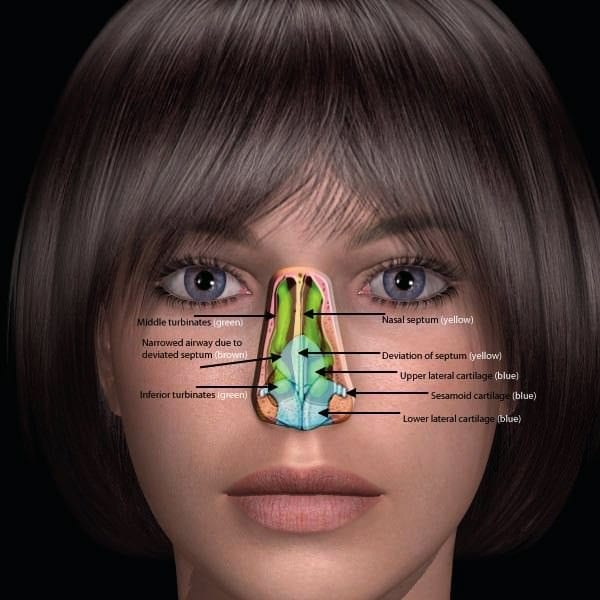 A deviated nasal septum is especially problematic at night, because it obstructs nasal airflow through one or both nasal airways, which disrupts sleep.

If you have a deviated septum, which is defined as a curve or deviation to the normally straight nasal septum (the cartilage that is in the center of your nose and which separates the nasal airways from one another), most likely you have difficulty breathing through one nasal airway or the other.

Although a deviated septum may not be very visible on the outside of the nose, it can be highly troubling inside the nose; restricting nasal airflow and breathing volume to one or both nostrils.

“I am 100% disabled veteran with back and leg injuries so I have to sleep on my right side with a special pillow to support me or I have terrible back pain. Until I started using the Cones, I was having difficulty breathing through my nose, because I also have a deviated septum that I have had repaired twice, without complete success. The Cones have made a tremendous difference. Sleeping isn’t an issue anymore. I can breathe more easily and sleep comfortably so no back pain in the morning.” 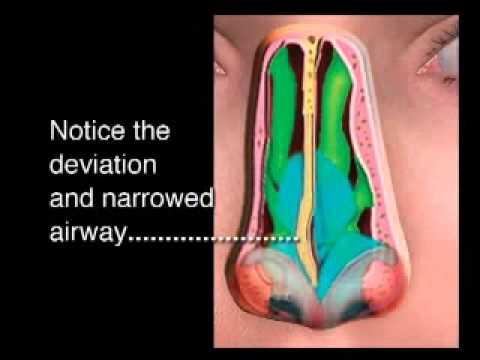 What is a deviated septum?

A deviated septum is an abnormal curvature or “deviation” in the nasal septum. As shown above, when the septum is deviated it narrows one of the nasal airways and limits airflow.

The Max-Air Nose Cones are specifically suited to relieve the blocked, stuffy-nose feeling that is caused be a deviated septum.

“You can add me to your list of positive reviews. “I have used the Nose Cones for some time now and have experienced a great amount of relief in being able to breathe out of my left nostril, which otherwise is almost 100% blocked by a deviated septum. I do not sleep without it. I highly recommend this product. I tried the strips with adhesive that you can get in the store, that help you breathe right, but my skin was irritated and because of natural skin oils, the strips slip away during the night. Thank you for your product!”

Max-Air Nose Cones not only maximize nasal airway relief, they are ultra-soft, simple-to-use and engineered for comfort and fit.

Made from specially selected FDA-certified medical material (latex-free and hypoallergenic), Max-Air Nose Cones are squeezie-soft, have side holes to make them lightweight for barely noticeable wear, yet are durable and resilient enough to bypass the nasal obstruction and allow maximum breathing relief.

What are the top 7 symptoms of a deviated septum?

THE PRIMARY SYMPTOM OF A DEVIATED SEPTUM IS DIFFICULTY INHALING THROUGH ONE NOSTRIL OR NASAL AIRWAY, WITH NO APPARENT NASAL CONGESTION.

A deviated septum can cause or complicate a whole host of nasal and sleep problems. In addition to difficulty inhaling through one nasal airway, other common symptoms are:

With its immediate stenting action (you will feel the rush of airflow immediately and hear a clear difference when inhaling), the Max-Air Nose Cones hold the airway open, even when sleeping to one side or the other. Start breathing more easily so that you may get to sleep faster, anytime that you choose.

What can be done to relieve a deviated septum?

Nose Cones work at the source of the airway problem, inside the nasal passageways.

Depending on the severity of the deviation, surgery may helpful in correcting the deviation. An Otolaryngologist (Ear, Nose & Throat Surgeon) will perform a septoplasty to straighten the nasal septum.

Super soft (like a contact lens), Max-Air Nose Cones bypass nasal obstruction from a deviated septum by gently stenting an open-air pathway around the deviated septum, so that you may inhale freely and deeply with your nose.

How can I tell if the new Max-Air Nose Cones will work for my deviated septum?

There is an easy way to tell if the Max-Air Nose Cones will work for you. It is called the “Cottle Maneuver”.

Simply block one nostril with your thumb. Then gently take hold of the other nostril and manually dilate it by gently pulling it open laterally towards the cheek. Inhale normally through the manually dilated nostril. Repeat maneuver with the other side.

Do you feel an improvement in airflow?

If there is a feeling of improvement on one or both sides the Max-Air Nose Cones may be just the solution that you seek.

If there is no improvement, chances are that your obstruction is more complicated and it is advised that you seek attention from an Ear, Nose & Throat surgeon. For more information visit the American Academy of Otolaryngology website.

How do the Max-Air Nose Cones work to relieve a deviated septum? Often noses with a deviated septum have varying size nasal passages. The Cones are easy to customize for this issue. Simply purchase two sizes. Size one side according to the direction on our sizing guide, and then order a smaller size of the Max-Air Nose Cones for the problematic deviated septum side.

Some deviated septum noses only have a problem with airflow on one side of the airway, and so only need help in one nostril. The Max Air Nose Cones may be separated and worn individually to combat this very prevalent condition.

Order Today And your relief is on its way!