Searching for a nasal airway relief aid to open nasal airflow and relieve your blocked nose so that you may breathe more and sleep well? Now you have a choice that is effective and comfortable.

If your nose only feels blocked during sleep,

the Max-Air Nose Cones is the choice that you will want to use. They are made with our softest material that gently holds open blocked noses during sleep.

If your nose feels blocked all the time, day and night,

the Sinus Cones is the choice that you will want to use. They are made with a soft but slightly firmer material that provides more support for opening more severely blocked noses.

Unsure which material will perform better for you? With our 30-day money back guarantee, you can order both products, try them, and return the products that don’t suit your particular blocked nose situation.

Simply slip in the Cones to relieve blocked, stuffy or collapsed noses.

Max-Air Nose Cones, and slightly firmer Sinus Cones, aid the natural structure of the nose by gently stenting-open the nasal airflow from the inside (at the source of the problem), so that you may breathe in deeply and freely all night, any night you choose.

Blocked nose is a symptom of nasal collapse that causes a feeling of stuffiness and difficulty inhaling through your nose.

The two most common reasons for feeling as though your nose is blocked shut during sleep (without nasal or sinus congestion) are due to angenesisal problems.

Max-Air Nose Cones help to reinforce the sidewalls of the nose by lending a temporary, soft framework inside the nasal passageways to prevent the sidewalls from collapsing, resulting in maximized airflow.

Your nose is like a “POP-TENT”. The nasal septum cartilage and other cartilages of the sidewall hold the soft-tissue sidewalls of the nose “taunt” so that they do not collapse every time that you inhale.

In some people, the cartilages of the nose are not rigid enough to combat the inward force  of air when inhaling, and pathological “nasal valve collapse” occurs on one or both sides.

The “nasal valve” is the narrowest inlet of the nostril. When air flows rapidly through this narrow opening, it causes a force inward, which may cause the nasal sidewall to collapse inward, “blocking the nose”.
Often this collapse only happens during the night, when gravity or squishing your nose into the pillow collapses the nasal sidewall. 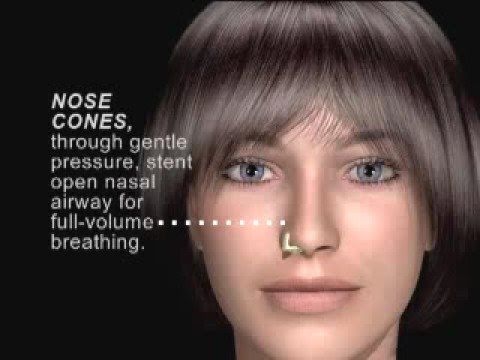 TIP: Place a little dab of nasal saline moisturizing cream around the very top of the Cones to relieve nasal dryness.

For professional assessment of your nose problem, especially with bleeding, prolonged sinus infections, or constant nasal blockage, see an Ear, Nose & Throat specialist, also called an Otolaryngologist. The doctor will examine your nasal airway and may conduct a CT scan of your nose and sinuses to see if there are any hidden obstructions that may be the cause of more serious airway obstruction.

Order Today And your relief is on its way!